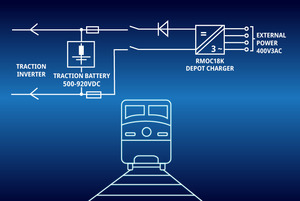 The replacement of the internal combustion engine (ICE) by the electric motor is touted as key in reducing pollution from automobiles, but the trend isn’t confined to the road: converting diesel locomotives to electric or hybrid operation is also attracting much attention as a means to combat global warming.


For locomotives, switching to electric power has multiple benefits, including a reduction in NOx emissions, noise levels, and fuel consumption, and improved ease of maintenance and higher reliability. In fact, most diesel locomotives don’t employ the diesel motor to drive the wheels directly. Instead, the diesel motor drives a generator that powers electric motors at the wheels. Since the system is partially electric to begin with, it might seem relatively straightforward to remove the diesel engine and take power directly from existing networks of high-voltage overhead wires.

An all-electric approach works well for fully electrified railroads, but overhead power lines aren’t always available in the train shunting yard. Instead, rail operators are turning to a hybrid locomotive (“dual-power“ in railway terminology) that primarily runs under battery power with a small diesel engine powering a generator for auxiliary power if the battery is depleted.

A German cargo rail operator, is gradually swapping all its current diesel units for more environmentally friendly hybrid alternatives. The company plans to eventually replace around 900 older locomotives, with the first freight units scheduled to enter service in 2023 and shunting units following in 2024. When the hybrid phase-in is complete, the operator expects to reduce energy consumption by 30 per cent and fuel consumption by one million liters of diesel per year.

New shunting locomotives rely on an 850V lithium-ion battery pack as its primary source of energy, providing the 80 tonne shunter with 500kW of traction power. The system also uses an on-board charger in the range of 15-20kW to charge the batteries while the locomotive is in the depot.

That’s where RECOM comes in. Working with one of the largest Tier-One supplier of railway systems and electrical equipment in the industry, our PCS division has won the contract to supply the on-board chargers for the first 80 hybrid shunting locomotives, with further orders expected to follow.

In this case, RECOM-PCS was able to offer a standard design with modified connectors that provides all required features and the railway compliance in one compact unit. The design is based on RECOM-PCS’s existing RMOC18k, which was originally designed for charging on-highway vehicle batteries, but is also ideally suited to the needs of the railway depot charger. With a 3-phase 400V AC input supplied from the industry-standard CEE 32A socket, the RMOC18k can generate an output power of up to 18kW with output voltage ranging up to 920V DC. PCS will perform all railway relevant approvals and mechanical design regarding the specialized connections and mounting. Figure 1: the RMOC18K and its railway implementation (Source: RECOM)


Figure 1 shows the basic RMOC18K and the proposed packaging configuration for the hybrid locomotive application. 
As Figure 2 illustrates, the on-board charging module includes the RMOC18K as the main power supply that feeds two battery packs plus all of the features needed to meet the customer’s requirements, such as output voltage and current metering, status indicator lamps, output fuses, reverse voltage protection, and overvoltage protection.

RECOM also offers several standard battery chargers with cascadable power levels that are designed for use on rolling stock, trackside or any kind of railway infrastructure. The SA320x and SA500x families are compact battery chargers with single-unit outputs of 3.2kW and 5kW respectively. They feature 94% efficiency and include active PFC with an active power factor of 0.9 at full load. The battery chargers also feature a full range of input protections (inrush current protection, EMI filter, and protective fuses) and output protections (overvoltage, overcurrent, short-circuit, and over-temperature).

The chargers also feature a current sharing function that allows parallel operation for increased power output or redundant n + 1 operation. The units run on 3-phase 380 – 440V AC without the need for a neutral connection or high voltage DC-input. They comply with the relevant railway and industrial standards such as:

Other features include monitoring outputs for battery current sensing and an RS485 MODBUS or CAN J1939 interface for data communication.